Haumea Dwarf Planet is the third largest and third closest dwarf planet from the sun. It is famous for its oval shape and many other interesting facts. It is located beyond Neptune and near the dwarf planet Pluto.

In 2004 a team lead by an American astronomer Mike Brown discovered it. Though it was considered as a dwarf planet in July 2008 by the naming committee of the International Astronomical Union (IAU). It was named “Haumea” after the Goddess of Fertility and Childbirth in Hawaiian mythology.

Here in this article, we have mentioned the interesting Haumea dwarf planet facts and all other information.

It was discovered on 28 Dec 2004 at the Palomar Observatory in the United States by a team lead by ‘Mike Brown’. The Discovery of this dwarf planet become controversial when Spanish astronomer Luis Ortiz Moreno and his team claimed to discovered it in July 2005.

Luis Ortiz Moreno claimed he has taken images of Haumea in March 2003, but did not submit a report to MCP (Minor Planet Center) before July 2005. Whereas Mike Brown and his team published a report intended to announce the discovery in Dec 2004.

⇒ How did Haumea get its name?

As Mike Brown and his team discovered it just before Christmas, so they gave it the nickname “Santa”. The Spanish team called it 2003 EL61, according to the date of its taken image.

Whereas the name Haumea was considered as a Goddess of Fertility and Childbirth in Hawaiian mythology in 2006. It was reclassified as a dwarf planet in July 2008 by the IAU.

This dwarf planet comes in the category of Trans-Neptunian Objects (TNOs) and located in the Kuiper belt region. The average distance of Haumea from the sun is around 43.20 AU. (1 AU is the distance between the Sun and Earth). It is the 3rd closest dwarf planet from us in our solar system.

One of the best Haumea dwarf planet facts is, its shape and size. It looks like an oval and its shape is like a triaxial ellipsoid. The approximate dimension of the ellipsoid is 2100 × 1680 × 1075 km. The size of Haumea and its moon, compared to Earth

According to the scientists, its diameter at the elongated side is near to Pluto’s diameter and is half at the pole side. The mean diameter of the Haumea is considered in the range of 1450 km to 1632 km. Though different sources represent their different sizes. But this is the third-largest dwarf planet of our solar system.

⇒ Haumea one year and one day

It takes around 283.7 earth years to complete one orbit around the sun. So the Haumea length of the year is around 84 earth years.

Well, this dwarf planet rotates around its axis quite fast. Scientists believe that it got an elongated shape because of its rapid rotation. It is one of the fastest rotating objects in our solar system. One day on the Haumea is around only 3.9 earth hours.

Related:-How long is a day and year on each planet

The astronomers announced the discovery of the ring system around it in October 2017. The approximate radius of its ring is 2290 km and the width is around 70 km.

It is one of the coldest objects in our solar system because of its distant location from the sun. The aphelion of the Haumea dwarf planet is 51.6 AU from the sun. It is a very cold TNO and according to scientists, its temperature would be below 50 K (-223 °C).

Because crystalline ice forms when the temperature is above 110 K. The surface of this dwarf planet looks like snow (color). It has a strange dark red spot on its surface. It is the third brightest object in the Kuiper belt after Pluto and Makemake.

Its astrological symbol looks like ‘pi/π’ with two dots. Look at the image: 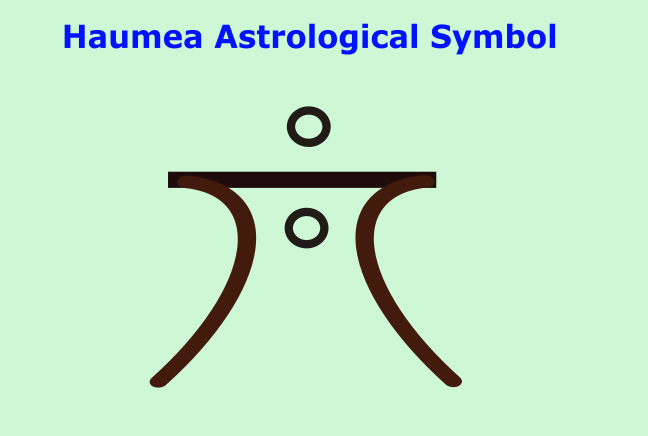 ⇒ What is Haumea made of?/ Composition

It has two main parts core and mantle. The core is made of hydrated silicates of clay minerals with a density of around 2.68 gm/cm3. Its dimensional composition range is 1626 × 1446 × 940 km.

Whereas the mantle is made of ice and takes 17% mass of the Haumea. The average density of this object is 2.01 gm/cm3.

So this was some Haumea dwarf planet facts and other important information. I hope you loved reading and knowing about it. If you have any questions regarding this astronomical object, comment to us below.

previousHow to Calculate the Mass of a Planet?
nextHow big are stars? Compare to Sun and Earth