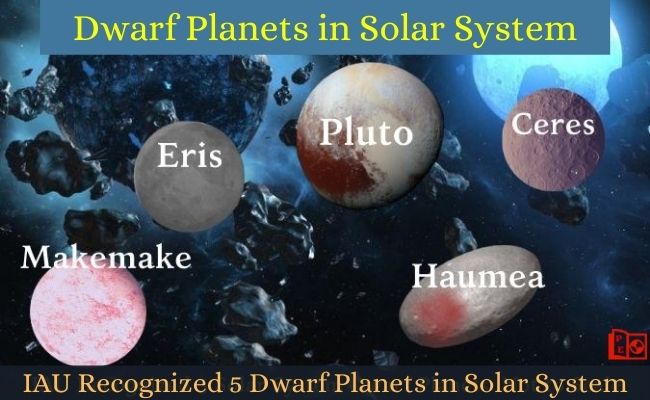 Dwarf Planets are the worlds in our solar system that directly orbit the Sun, like planets. In the definition of planets and dwarf planets, there is only one significant difference that dwarf worlds have not cleared the neighborhood objects around their orbit.

In 2006, the International Astronomical Union (IAU) categorized the objects orbiting the sun into three divisions:

Around 1800 AD astronomers have discovered several celestial bodies between planets Mars and Jupiter. They used to consider these bodies as a planet. But when the number of bodies increases continually astronomers classify another category and started using the word asteroid for some celestial bodies.

Here in this article, we have mentioned what is the definition of dwarf planets vs planets? This definition is given according to the International Astronomical Union (IAU).

According to IAU, the planet is a celestial body that:

According to IAU, the dwarf planet is a celestial body that:

According to the International Astronomical Union (IAU), there are 8 planets and 5 officially recognized dwarf planets in our solar system.

These 8 planets are “Mercury, Venus, Earth, Mars, Jupiter, Saturn, Uranus, and Neptune”. Whereas 5 dwarf planets in our solar system are “Pluto, Ceres, Eris, Haumea, and Makemake” and these 5 are officially accepted by IAU.

There are other dwarf worlds in our solar system that has not considered by IAU yet. These are known as “near-certain”, “most-likely”, or “possible” dwarf planets.

Here is given some possible dwarf planets list in our solar system that is not officially recognized by IAU:

Those above 7 mentioned list of dwarf planets come in the category of “near-certain” or “most likely” dwarf worlds. These are also known as ‘minor planets’ (Minor Planets = Dwarf Planets + Small Solar System Bodies).

Here in the below picture, some dwarf planets list (Possible + IAU Recognized) are added with their size. The naming committee of the IAU has decided some of the Trans-Neptunian Objects as a most likely dwarf planet. (Transneptunian objects are those object that orbits around the sun with higher distance than planet Neptune).

Here we have given a list of dwarf planets in order with increasing distance from the sun and where they located in the solar system. In the below table both dwarf planets are listed as ‘near-certain’ as well as ‘IAU defined’.

Dwarf planets in order from the Sun

Pluto is the largest dwarf planet in our solar system with a diameter of approximately 2380 km. It used to be a planet but in 2006 IAU decided to re-classify it into the dwarf planets category. Though Pluto has a small size compared to our earth, still it has 5 moons/natural satellites. Ceres is the smallest dwarf planet in our solar system with a diameter of approximately 940 km. It is located in the region of the Asteroid belt. The astronomers have discovered Ceres around 1801. So this is the earliest known dwarf planet by astronomers.

Eris has one known moon and was discovered in January 2005. Between 2005 to 2006 it was considered as 10th planet of our solar system by most astronomers. Eris re-classified into the dwarf planet in 2006 by IAU.

Haumea was discovered in December 2004. It was not considered as a dwarf planet by the naming committee of IAU till July 2008. It has 2 moons that orbit around it. Haumea is famous for its oval shape.

Makemake was discovered in July 2005 and announced as a dwarf planet by the naming committee of IAU in 2008. It has one known natural satellite. This dwarf planet was discovered around Ester (a festival) in 2005, so it is also known as an ‘Easterbunny’.

These are the 5 dwarf planets in our solar system recognized and considered by IAU. There are thousands of more objects in the solar system to discover that maybe a dwarf planet or most likely it.

previousWhat are the 5 Layers of the Atmosphere in Order?
nextPlanets Questions and Answers