It is an ‘ice giant’ planet and does not support life. This ice giant is smaller than the planet Uranus but has greater mass than Uranus. It is the densest giant planet in our solar system. It is named after the Roman god of the sea ‘Neptune’.

Neptune planet is one of the most fascinating planets in our solar system. It has many interesting and wondrous facts such as has attractive color blue, coldest average temperature, faint ring system, the densest ice giant, the smallest giant planet, its one year, and slow speed around the sun.

Here we have mentioned some of the interesting facts about Neptune planet:

William Herschel discovered the planet Uranus on 13 March 1781. Whereas the planet Neptune was discovered by a German astronomer ‘Johann Galle’ on 23 Sep 1846.

Pluto was discovered on 18 Feb 1930 by an American astronomer Clyde Tombaugh. Pluto used to consider the 9th planet, but when it was reclassified into a dwarf planet, then Neptune becomes the last discovered planet in our solar system.

Neptune is the farthest planet in our solar system with an average distance of around 30.10 AU from the sun. 1 AU is considered the distance between the sun and earth and is around 150 million km.

There are four giant planets in our solar system Jupiter, Saturn, Uranus, and Neptune. Of these all, Neptune is the smallest one with a diameter of around 49260 km. Still, it is almost four times larger than our planet earth.

⇒ It is the densest giant planet

Though it is the smallest ice giant, still it is heavier than planet Uranus. Because of its high density, it is more massive than the planet Uranus. Neptune’s average density is around 1.64 gm/cm3. This mentioned value of Neptune is the highest compare to all other giant planets. The density of the all Giant Planets: Comparison to Earth

⇒ It has a short day but a long year

Neptune planet rotates around the sun (or its barycenter) with a quite slow speed of around 5.40 km/sec. It takes around 164.8 earth years to complete one revolution around the sun. So it is the longest year of any planet in our solar system.

The Neptunian day is shorter than our planet earth. It takes around 16.2 hours to complete one rotation on its axis.

Since its discovery in 1846, this planet has completed only one rotation (1 Neptunain year) around the sun. Though this ice giant is very fast while rotating its own axis.

⇒ This planet has a faint ring system

It has a ring system like other giant planets. Neptune’s ring is fainter and possesses 5 rings. In order of increasing the distance from Neptune’s surface, the names of these five rings are Galle, Le Verrier, Lassell, Arago, and Adams.

These names are named after the astronomers who contributed to their discoveries. The ring system is made of mostly ice particles, dust, and organic-based materials.

Galle and Lassell rings have more width of 2000 to 5000 km, whereas the other three rings are narrow. The widths of the narrower rings are around only 100 km or less.

Neptune’s great dark spot is like Jupiter’s great red spot. It is also known as GDS-89, as it was discovered in 1989 by the space probe Voyager 2 NASA.

The Great Dark Spot is an anticyclonic storm located in the southern hemisphere of Neptune. One of the interesting facts about Neptune is that this storm has the fastest recorded wind speed. Here the wind blows around 2300 km/hours and it is the fastest wind in our solar system.

The great dark spot looks similar to Jupiter’s red spot but smaller in size. It has the almost same size as the earth.

This ice giant farthest planet has 14 known moons. Its moon ‘Triton’ is the largest in all 14 natural satellites. Triton is the only Neptunian moon that has got spheroid shape because of its massiveness.

Triton is the 7th largest moon in our solar system and the only large known moon that has a retrograde rotation. The 2nd largest Neptunian moon is Proteus has only 0.25% mass of the Triton.

⇒ Neptune planet is the coldest

The distance of the Neptune planet from the sun is quite far compared to other planets. So definitely the radiation of the sun will not reach much, compared to the planets that are near to the sun. 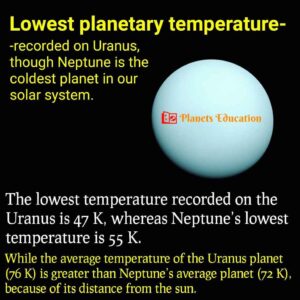 ⇒ Triton was discovered just after 17 days after Neptune

⇒ Neptune’s moon Triton is colder than it

The world Triton is the coldest known world in our solar system. The surface of the Triton is mostly made of frozen Nitrogen and water ice. It is colder than the Neptune planet. The minimum recorded temperature on this moon is approximately 38 K (-235 °C).

⇒ Only 1 spacecraft have visited Neptune yet

NASA’s spacecraft Voyager 2 is the only space probe that has visited or flyby the Neptune. This space probe was launched in August 1977 and took almost 12 years to approach near Neptune. Voyager 2 flew by the planet Neptune in August 1989 and send close-up pictures of this ice giant planet system.

So these were some interesting facts about Neptune Planet with proper information. But this is not the end, this article will be updated with more astonishing facts and information on a periodic basis. Keep in touch or share it. If you have any queries or suggestions, please ask in the comment section.

Read here about all 8 planets:-