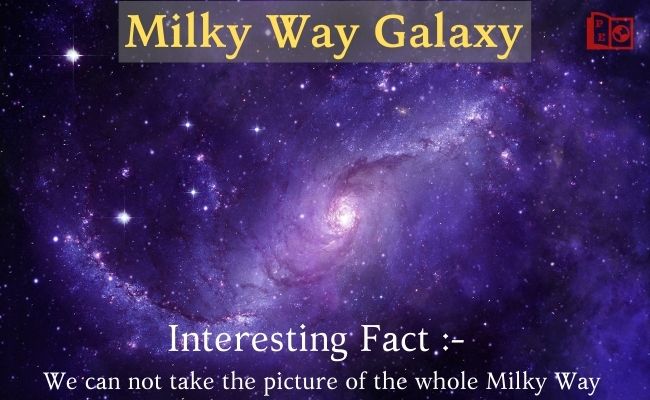 The Milky Way Galaxy is one of the billions of galaxies present in the universe. It is our home galaxy and contains our solar system, stars, planets, black holes, and other billions of objects.

Let’s see 20 special facts about our milky way galaxy (must read the 7th number in the list to explore more about our galaxy facts and the largest one):-

2. Milky way is part of a group of galaxies called the Local Group. The local group contains 50 galaxies including Milky Way, our neighbor galaxy Andromeda, and other larger and smaller galaxies.

4. The center of the milky way is called the galactic center. 8. Our solar system including the sun and other planets is located 27000 lights years away from its galactic center.

9. More than 90% of the mass of the milky way is invisible and this mass is referred to as ‘dark matter’.

10. Stars, dust, gases, and other objects including our solar system orbit the center of the milky way at approximately 220 km/sec. So basically our sun and planets all are orbiting around the milky way center and it takes 240 million years to complete one revolution.

11. Just as our planets have few moons/satellites, similarly Milky Way galaxy also has many satellite galaxies.

12. Milky Way is the second-largest galaxy in the Local Group, whereas its nearest galaxy Andromeda is the largest one in Local Group Galaxies.

13. Scientists have estimated that this galaxy will collide with Andromeda galaxy. Approaching the speed of Andromeda galaxy towards the milky way is 110 km/sec and it would take around 5 billion years to collide.

14. It has around 100-400 billion stars and approximately 100 billion planets and almost 100 million stellar black holes.

16. Around 7 new stars are born in our galaxy every year. Proxima century is the nearest star from the earth after the sun, approximately 4.2 light-years away from the earth.

17. The oldest star of our galaxy is around 13.5 billion years ago that was formed soon after the big bang.

18. Our solar system including the sun has orbited around the milky way approximately 20 times yet. Because the formation of the solar system is about 5 billion years ago and one revolution takes 240 million years.

19. We can not take the picture of the whole milky way because we can not go outside of it. The pictures we have seen are the artist’s conception or maybe pictures of other galaxies.

20. Our sun and other stars oscillate through the galactic plane along with orbiting around the center of the galaxy.

So these were the special and interesting 20 facts about Milky Way Galaxy. You must have liked reading about it. You can check some below articles to explore more from “planets to Universe”.

previousAll About Planet Mercury with its Amazing facts
nextWhat are the 5 Layers of the Atmosphere in Order?