When is the End of the Earth? 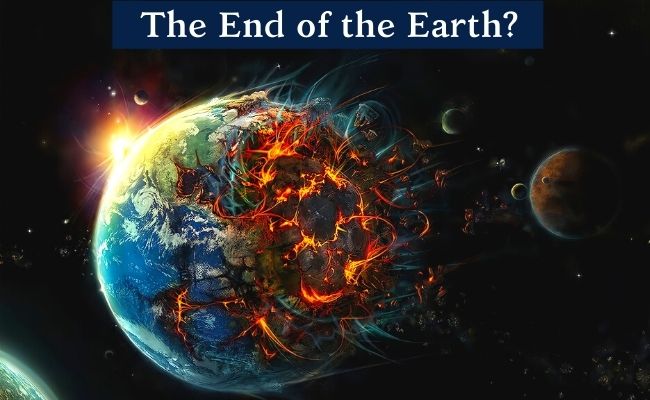 What is there today will not be there tomorrow. This is the ultimate truth, so one day there will be the End of the Earth.

There could be many reasons for life on earth to end. A few reasons could lead extinction of humans and some possibility led to mass extinction on earth. Whereas with some possibilities, even the whole earth will be destroyed and merge with space dust.

Our earth was formed around 4.5 billion years ago, but eventually, the earth will be going to end in the future. So, here in this article, you will find some interesting information about the End of the Earth or the Future of Earth.

Possible reasons for the End of the Earth

Life on earth started to originate around 3.5 billion years ago. And if you ask when will life on earth end, then there are not any exact dates.

With some estimation by scientists, we can give some time span in which the earth would not be sustainable for life. And within a few upcoming billion years, our world would definitely end. There could be many reasons for it.

So, here below are some possible reasons that could be the ultimate fate of our earth.

Gravity is the weakest fundamental force in all fours. But this force has the power to disturb everything in space. Due to the gravitational effect of heavy space objects, the earth’s orbit would be disturbed from its original position and that could lead to disaster.

If any large celestial body as heavy as a star comes near to solar system then this would create a lead impact on the life on earth. There’s a small probability that if our 8 planets started exerting mutual gravitational forces, all planets’ orbits can also be disturbed.

When our moon’s gravity can create tides on earth’s ocean then you can just suppose what would happen to the earth if any star approaches near to sun/earth.

Impact of asteroids and comets

Asteroids and comets are celestial bodies comparatively smaller than planets and in direct orbit to our sun. They are billions in number and not far from earth.

Usually, meteorites land on earth but they are very small. But sometimes the impact of large meteorites has created a serious situation on earth’s life (for example – the end of dinosaurs).

Asteroids and comets could be hundreds of kilometers in size. If in the future any large asteroids or comets get impact with earth then it could be possible that life on earth will end. The Sun will become a red giant

Our sun is a yellow dwarf-type star. Sun produces heat and energy by converting hydrogen atoms into helium atoms in its core. And this is known as the fusion reaction of the sun.

When all hydrogen atoms got converted into helium then it will start expanding. It will expand many times compared to the previous size and this will get the red giant star phase.

A red giant star is so luminous and very large in size. This high luminosity will burn the whole earth and also its size will engulf the earth in its photosphere. According to scientists, our Sun will become a red giant in around 5.5 billion years. So, this would be the end of our planet earth.

Supernova explosion near the solar system

When a supergiant star collapse, it creates supernova-type stars. In this phase, stars explode and release high-temperature gamma rays. According to scientists, in around 500-600 million years a supernova explosion would happen near to solar system.

If any supernova star exploded even around 5000 light-years away, still the emerging rays would be enough to end humanity and lead to mass extinction.

According to scientists, the earth’s rotation is slowing down ever since its born. It takes almost 1.4 milliseconds per 100 years.  This is a very slow process and happens with every orbiting object.

The orbit of our earth and other planets will decrease with time. Eventually, billions of years later it would merge with the sun and will be the end of the earth.

As we know technology is increasing day by day. So, it could also have the power to end life on earth. Because every technology has some merits and demerits.

I hope, we humans would not be the reason for any type of mass extinction. But if it happens then wouldn’t take millions of years unlike the above-explained reason, it may be in the next 10 to 100 years, who knows! So, these were some possible reasons for when is the end of the earth. We hope the earth is not going to end soon and we can live longer with the future generation.