Revolution of Planets Around the Sun 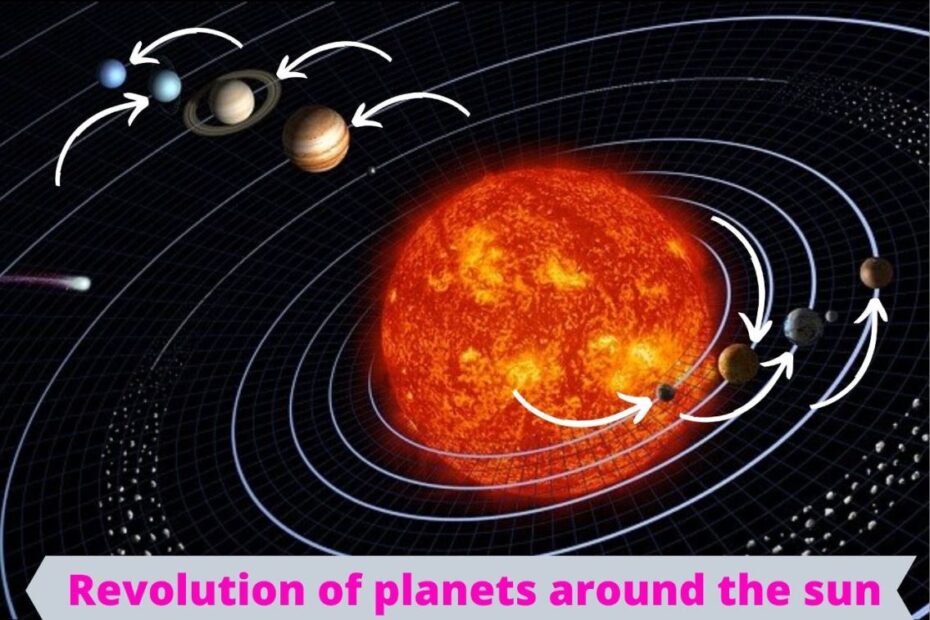 Our 8 planets, asteroids, comets, and some other solar system bodies revolve around the sun (or barycenter) in an orbit. Here in this article, you are going to learn about “rotation and revolution of planets around the sun“.

Our solar system including the sun, planets, and many asteroids all are formed around 4.5 billion years ago with the formation of the solar system. The solar system was formed due to the gravitational collapse of a giant cloud and dust in space. This made a disturbance in the cloud that results create clumps of gases due to gravity. Astronomers estimate that this happens because of the explosion with a supernova star.

Scientists believe that this interstellar cloud was so massive and started the contraction of the most molecules in the center. So the major part of this cloud and dust at the center made the Sun.

Check About:- Facts of All Planets in Order

Why do planets revolve around the sun?

Check About:- Gravity and Gravitational Force

According to Newton, gravity is a force and is the reason planets orbit the sun. When we drop any object it falls on earth due to gravitational pull. In the same way gravity of the sun pulls the planets. Sun is the heaviest object of our solar system so it develops the strongest gravitational pull.

According to the initial velocity of planets, they want to travel in a straight path. But the centripetal force applied due to the sun’s gravity pulls these planets and makes a curved or elliptical orbital path. The gravitational pull of the sun is equal to the centripetal force that always acts inward.

Gravitational pull or centripetal force due to the sun, F= G×M1×M2/r2

M2- the mass of any planets

r – the distance between the sun and the planet

According to Einstein’s general relativity theory, gravity is due to curvature of the space-time. The heavier objects curve the space-time more compare to the lighter objects. The General Relativity Theory gives the highest accuracy to understand the orbital motion of the planets.

In this theory precession of the planets orbit and frame-dragging led the astronomers to a better understanding of the revolution of planets around the sun. Mercury has the most elliptical planetary orbit in our solar system and Newton’s gravity law was unable to explain it. While Einstein’s general relativity theory gives a precisely accurate result to understand the orbital path of even Mercury.

Because of the gravity of the sun, planets are not capable of escaping from a certain path in a shape most likely to a circle around the sun. These paths are called the orbit of the particular planet and the shape of these orbits are elliptical (most likely a circle).

In which direction do planets revolve around the sun?

In the solar system our 8 planets Mercury, Venus, Earth, Mars, Jupiter, Saturn, Uranus, and Neptune revolve around the sun in an elliptical orbit. The eccentricity of these elliptical orbit varies for all planets and Mercury has the most eccentric orbit.

The direction of rotation of planets is defined with a reference object that is considered as an almost fixed object in space for all planets. The north star or pole star (Polaris star) is famous for holding an almost still position and the entire northern sky is revolving around it. While determining the direction of planets and most of the solar system objects we consider this Polaris star as a reference.

Must Check:- The Biggest Star Stephenson 2-18

⇒ The axial tilt of all Planets The axial tilt of all planets: Venus and Uranus rotate counter-clockwise Prograde and Retrograde Motion of Planets

Revolution of planets around a barycenter

“In actual all planets orbit around a point that exists inside or near their sun. This point is known as the barycenter and it is the center of mass of the two or more bodies“.

The barycenter point depends upon the mass and distance of the orbiting bodies. If two bodies orbiting around each other at a common barycenter and one body is extremely massive compare to 2nd body. Then the center of mass or barycenter would locate inside the 2nd body. Every planet of our solar system orbit around its barycenter. For most of the planets, the barycenter lies very close to the center of the sun. Whereas barycenter for the planet Jupiter lies slightly outside to the sun.

So commonly it is said that our solar system planets orbit around the sun, but in actual all planets revolve around the barycenter point. Though in this article we have considered the revolution of planets around the sun.

Our 8 planets have the following orbital periods with respect to earth days:

So, here the article “rotation and revolution of planets around the sun” ends. I hope you have understood here ‘how exactly all planets revolve around the Sun’.