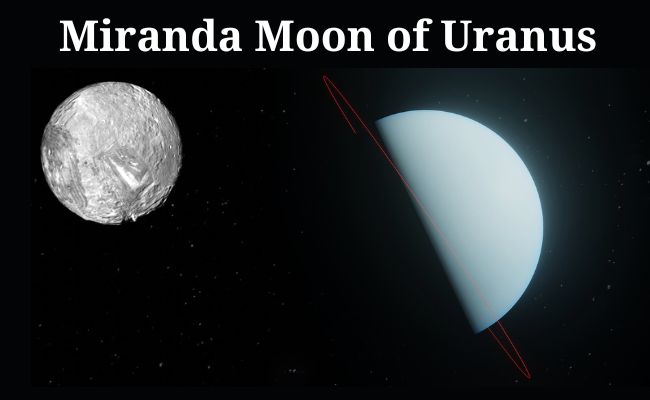 Miranda is the moon of planet Uranus. Uranus has a total of 27 moons, of which 5 are the major moons or large moons (Miranda, Ariel, Umbriel, Titania, and Oberon). Of these five major moons, Miranda is the smallest major moon of Uranus. The size of the Uranus moon Miranda is just 472 kilometers in diameter.

Miranda moon was discovered by Dutch astronomer and planetary scientist Gerard Kuiper on 16th Feb 1948 at McDonald Observatory in Texas, United States. The name Miranda was taken from one of the plays by William Shakespeare ‘The Tempest’.

Miranda is one of the strangest moons of Uranus compared to its others. From the nearest orbit in major moons to the coldest satellite, it has many interesting facts. Here in this article, we will discuss Miranda Moon’s Facts and other interesting information.

It is the smallest major moon of Uranus. The size of Miranda is around 472 kilometers (293 miles) in diameter.

Like other major moons of planet Uranus, the inner core of this moon is made of rocks and ice. But its surface is totally made of ice. The minimum surface temperature of moon Miranda is around -212 °C.

This moon has many different surface features. It has a tectonic, shape like a chevron, which is known as coronae.

Miranda is the nearest Major Moon to Uranus. It means the orbit on which Moon Miranda rotates around Uranus is the closest, compare to the other four major moons. The orbital distance from the planet Uranus is around 130,000 kilometers.

This moon takes just 1.4 earth days to complete one rotation around its planet Uranus. So, 1.4 earth days is the one year (orbital period) for this moon. It orbits at a speed of around 6.6 kilometers in one second.

The surface gravity of the moon Miranda is just around 0.077 m/sec2. It is very low compared to other large solar system objects. Because of Miranda’s lower gravity, if a person jumps from the highest cliff Verona Rupes, it would take around 10 minutes to land on the surface.

So, these were some special facts and information about Miranda Moon of Uranus Planet. Hope you have liked reading it. Check below some other Planets-Education articles.