What we can not observe yet in this universe possess the amount of mass-energy composition around 95%, whereas the rest 5% is what we can observe. This 5% contain normal matter of the universe including planets, satellites, stars, galaxies, and everything which we can see and observe. And in the mass-energy composition of 95% of the universe contains, 27% is dark matter and 68% is dark energy.

Here in this article, we will know some basic information and 15 special facts about dark matter and dark energy.

1. A lot is invisible

The visible universe is normal matters such as clouds, planets, stars, nebulas, galaxies, and these all are made of the atoms. But these all contain only 5% of the whole universe. The rest of the universe is invisible and is made of something we do not know about yet.

During the study of supernovas in the galaxies, astronomers found that the galaxies were moving away. Further galaxies were moving faster than nearby galaxies. They found it the universe is just not expanding, even the expansion is accelerating. Researchers and scientists concluded that dark matter and dark energy may be the reason for the accelerating expansion of the universe.

The dark matter and dark energy do not interact with electromagnetic radiation, neither it absorbs nor reflects light. So it is not easy to detect them.

4. No direct clue for its existence

There are only theories given regarding the existence of dark matter and dark energy. No labs or research center has given direct evidence of its existence so far.

There is no direct clue for its existence but scientists have experienced its effect in space. According to scientists, dark matter binds the universe, whereas the dark energy loosens up or speed up the expansion of the universe. Some astronomers believe, the only gravitational force is not strong enough to hold or bind the whole galaxies. They believe there is something that interacts with gravity and binds these galaxies, and they called it dark matter.

6. Space has its own energy

There is something in space since the Big Bang that is creating the space. That may a force or energy. We know the universe is expanding and accelerating, but where it all getting energy? Does space has its own energy? Yes! It may be. Some scientists believe the dark energy is the energy that space has. It repels gravity and accelerates the expansion of the universe. This energy does not get weaker during expansion and therefore as more space comes into existence, more of this energy-of-space would appear.

7. Dark energy formed from nothing and disappears in nothing

As we have not found any clue for its existence. Therefore some astronomers believe the dark energy formed from nothing and disappears in nothing. It is like the energy in the vacuum (objectionable!!!). It fits best like a quote and difficult to explain scientifically.

8. Responsible for the universe creation

As we read dark matter interacts with gravity and creates galaxies. Whereas space is created by the dark energy. So it would not be wrong to say that the dark matter and dark energy is responsible for universe creation.

10. Physicists know a lot that dark matter can’t be

It is rightly said that ‘most of the things we do not know that what to know’. Astrophysicists know more about what dark matter can’t be than what it is.

11. It has a relation with Einstein’s cosmological constant

Einstein considered this term to counterbalance the effect of gravity and to explain the static universe (the universe is neither expanding nor contracting) theory. Later in 1931 after Hubble’s discovery of the accelerating universe, he neglected this concept and consider it his ‘biggest blunder’ (for the static universe concept).

But the cosmological constant may be considered the energy that is counterbalancing the gravity. And this energy is closely associated with dark energy.

12. It interacts with gravity 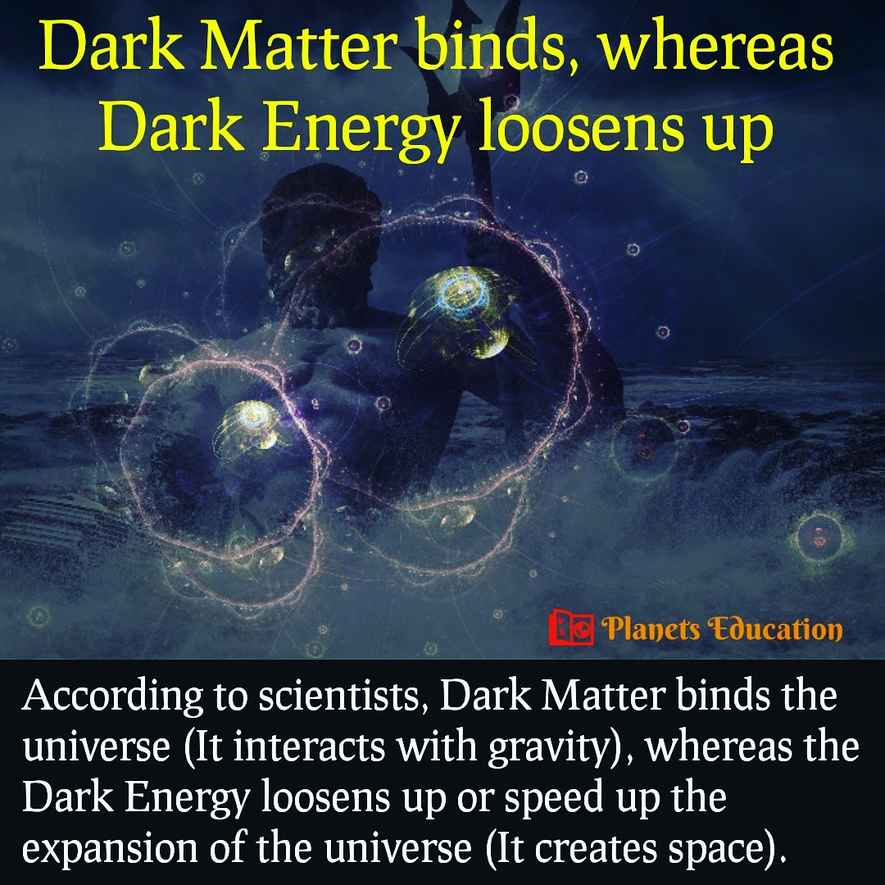 13. Dark matter and dark energy may not even exist

Though there is no direct evidence for the existence of dark matter and dark energy. But there are some abnormal effects in space that make it meaningful to consider these invisible mysterious matter and energy. Therefore it is generally accepted by some scientific communities, some astrophysicists. Still, we have a lot to know about the universe.

CERN (European Organization for Nuclear Research) is a scientific research center that is working to generate dark matter particles in the LHC. The LHC (large hadron collider) is the world’s largest particle accelerator.

15. Dark matter may be cold

Dark matter may be cold or hot. The current model favors ‘cold dark matter’ (CDM). The term ‘cold’ refers to its slower speed than the speed of light. According to scientists, the cold dark matter may have the following constituents: Axions, massive compact halo objects (MACHOs), weakly interacting massive particles (WIMPs). Though these are theoretical particles and objects.

So these were 15 special facts about dark matter and dark energy. These facts have been written in simple words. Do tell us by commenting, which one you like the most.

Our scientists and physicists always try to solve the mystery of dark energy and matter. We are pretty sure of existence but we have no clue so far but there is still more to come regarding this topic.